London in the Beginning…

Ok, the first day of rain and overcast skies was like a breath of fresh air and felt like home (Seattle). Now into day three – I am shaking my head and laughing at myself for the times I looked out my apartment window in Florence and – seeing the clear blue sky – actually cursed inwardly. I guess that marks me as a true Northwester. Folks from the Pacific Northwest who’ve been there awhile can probably attest to the same feeling. If we don’t get some grey skies and showers on occasion…well…we just start to get a little itchy. London has been an experience of extremes for me. Going from the lazy, heat filled days in a small city to this megatropolis that is constant motion, noise and bustle has taken a bit of getting used to but I love it! What a great city – Paris is still my number one but I could have an affair with London…

Just as with Florence – guidebooks abound with all you could ever want to see or know. The following are memorable bits so far on my meanderings. I have spent three days simply walking Everywhere. I think I have logged about 21 hours so far. Thank god for my Naot sandals – even so – I have returned to my little B&B room completely fagged as they say here. And soaking wet!

As big as London is – it is a walking city. I could have jumped on the tube and perhaps saved a little wear and tear on the joints but would not have seen nearly all the grandeur of a place that is steeped in this much history. Being from Seattle – a neophyte city as compared to the rest of the civilized world – I am stunned by so much visual evidence of a country’s growth and growing pains and will to survive. That so many of the buildings and public art has survived since the 16th,17th, 18th centuries – two world wars and the Blitz plus untold numbers of local skirmishes over these hundreds of years is simply amazing to me and a testament to the designers and builders. At home we just don’t have much in the way of historical evidence except of the indigenous population we did our level best to eradicate. I wonder if any of the buildings that grace our skyline will survive into the 25th century and what a lone traveler would make of them by comparison. And- you’re right – there is none.

Popular attractions – while most of the hardier tourists where braving the elements outside Buckingham palace waiting for the changing of the guard – I wandered over to the House Guard stables and witness the little known Changing of the House Guard. It happens every day at the same time but these are the Queen’s mounted guard. Being a horse lover – this was a delightful little discovery and there were no crowds at all. The guard comes from Buckingham palace down the city streets in tight formation in all their finery – swords included – on matched black horses. There is all the pomp and circumstance – lots of boot stamping by the soldiers on the ground, hoof stamping by hungry steeds, bellowed commands and ringing of bells. It was fabulous and a definite must see. As a note – these are regular soldiers who have the honor to be in the ceremonial guard but are also doing tours of duty in the real world.

Museums – London has seen fit to make most all of the national museums free – with an encouragement of donation. In a very expensive town and the dollar to pound exchange rate – I certainly appreciate that. The British Museum has been my fav so far but that’s because it has lots 3D stuff – sculpture, porcelain, weapons and the like – I’m not a huge fan of paintings. As a local friend of mine commented this morning – he loves to pop in periodically and see what we (Brits) have nicked from other countries. And, apparently some of those other countries are asking for their stuff back. What is really wonderful is that you are allowed to take pics and videos. Unlike Florence where photos inside a museum are grounds for expulsion or, at the very least, stern words from staff. I took more than my fair share today and it will be wonderful to share with folks when I get home rather than trying to trust my aging memory. 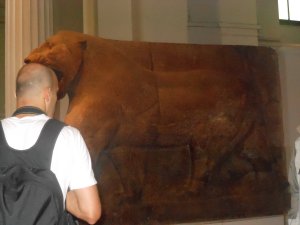 I will leave off with that for the day – more to come. As I celebrate almost a month on the road – there are truly only two things I miss. My Beloved and a bathtub – in that order. But certainly not in equal orders of magnitude…..

Personal reflections on life inside the famous spiritual community and ecovillage, by Graham Meltzer

Writing from the Twelfth House

Anne Whitaker's blog exploring astrology's many highways and byways...come and join me!

One woman's journey of accepting her WHOLE self - of seeking radical self-love and helping others do the same...

Blackbirds Above The Marsh
The Thiessen Review

Helping to find your next great read . . .

Watching The Photo Reels Go Round And Round...

Snapshots of a self-taught photographer's photographic journey and process..."I'm just sitting here watching the wheels go round and round, I really love to watch them roll... People asking questions lost in confusion, Well I tell them there's no problems, Only solutions..." --John Lennon

It's all about disbelieving your thoughts

A Blog of the Ridiculous and Sublime, by Mark Sackler

Empowering and Inspiring people to be fully authentic, loving, happy, peaceful and joyful in their lives.

Radius Of A Square